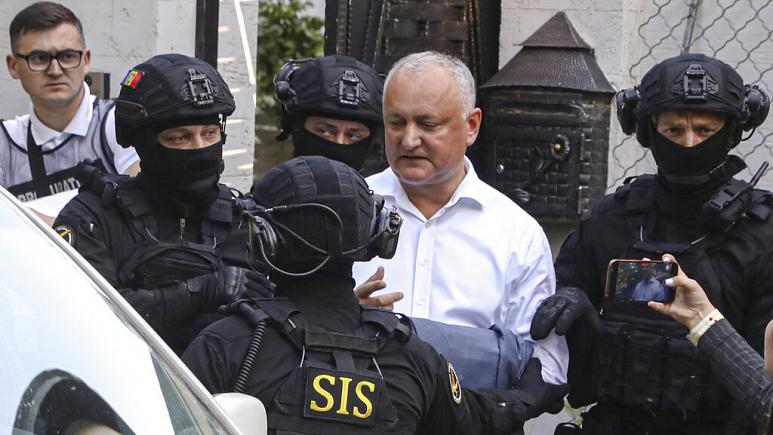 The former president of Moldova, Igor Dodon, was arrested on Tuesday after a raid on his home and a string of other private addresses.  The 47-year-old is the current leader of Moldova’s main opposition bloc, the pro-Kremlin Socialist Party, and led the country from 2016 to 2020.

According to the Moldovan judiciary Dodon is under is under investigation for alleged corruption, treason, illicit enrichment, and “illegal party financing”. Prosecutors said in a statement on Tuesday that a total of 10 buildings and 3 cars were searched as part of the warrant and “large amounts” of money and luxury items had been seized.

“During the searches,” the statement went on, “one of the persons tried to swallow and destroy documents found at his home, which confirmed the sale-purchase transactions of real estate worth about €700,000.”

Dodon will be held for up to 72 hours. Several police officers could be seen standing guard at the gate of the politician’s house on Tuesday while a number of Dodon’s supporters gathered in the street to protest.

Dozens also congregated outside Moldova’s parliament in the capital, Chisinau, demanding the government’s resignation. Kremlin spokesman Dmitry Peskov said on Tuesday that Moscow was “alarmed” by the “persecution” of Dodon, but also conceded that it was an internal Moldovan affair. “We are, of course, alarmed that again, such a practice and persecution is being used against those who are supporters of the development of friendly and mutually beneficial relations with the Russian Federation,” he told reporters on a conference call.

The country’s pro-Western and pro-Kremlin factions have become increasingly divided since Russia’s invasion of Ukraine. His arrest comes just one day after a Ukrainian court ordered the detention of former president Viktor Yanukovych.

Yanukovych is accused of treason over the Kharkiv Pact, a 2010 agreement that extended Russia’s lease on naval bases in Crimea, four years before Moscow annexed the peninsula. The 71-year-old fled to Russia in 2014 after he was unseated mass protests in Ukraine and has already received a 13-year prison sentence in absentia for treason. He has denied all allegations against him.